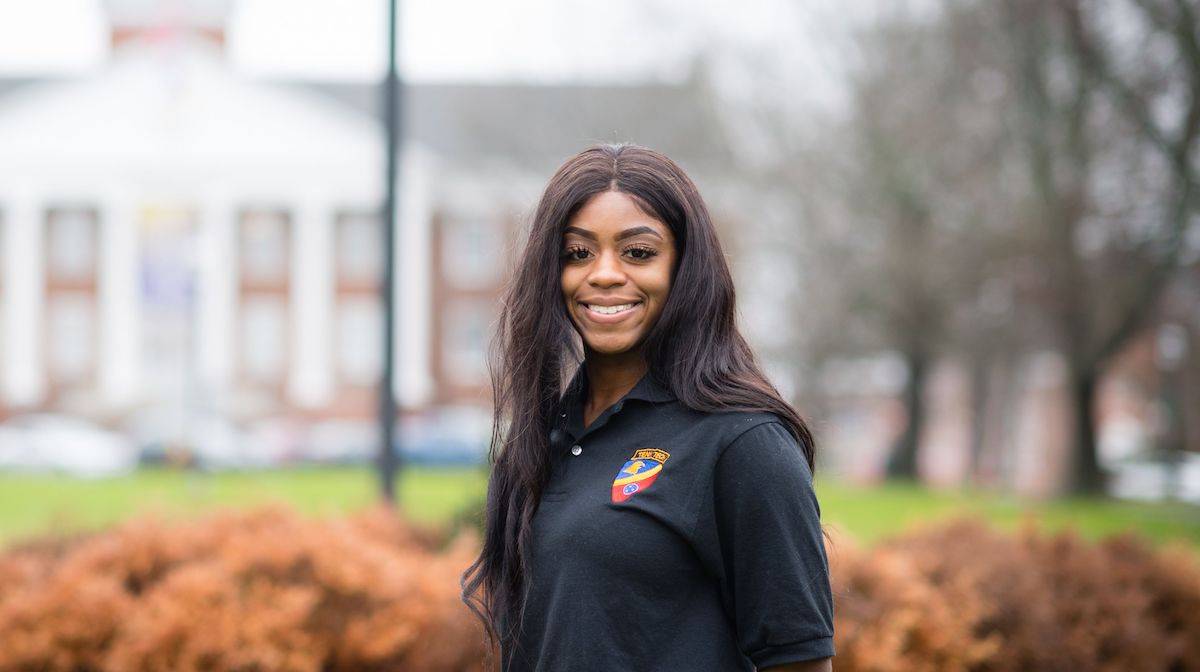 Mikeidrea Feacher, psychology ’20, knew from a young age she wanted to have a career in the military. Feacher grew up in Beaufort, South Carolina, and comes from a military background with several family members serving in different branches.

“Just seeing the opportunity that they had and hearing stories about where they got to travel is pretty much what motivated me to become an army officer,” Feacher said.

“I kind of fell in love with the program,” Feacher said. “By the time I got to middle school, transitioning to high school, I knew I wanted to do JROTC.”

Feacher joined JROTC her freshman year of high school and continued all four years. Her senior year, she was awarded the Army ROTC National Scholarship.

Feacher knew she wanted to go to an out-of-state university surrounding South Carolina and not much later made Tennessee Tech her home.

Feacher has continued in ROTC in the Golden Eagle Battalion. She serves as the battalion commander, which is the highest-ranking cadet within the ROTC program.

“My job is actually to oversee everything that’s going on in the battalion and making sure that everyone, all the way down to the freshmen level, is getting the proper training that they need in order to prepare them for their MS3 level so they can go to Fort Knox and pass camp,” Feacher said.

During summer 2019, Feacher traveled to Uzbekistan for one month to participate in CULP which is the Cultural Understanding and Leadership Program. Less than 1,000 cadets are selected nationwide and sent to over 20 countries.

“While I was there, we got to visit their different military academies and kind of intermingle with their cadets,” Feacher said. “We taught them some things we do here in America and then they kind of taught us some of their curriculums and what they do.”

Apart from their weekly schedule, they got to visit different cities in Uzbekistan and experience the culture.

Reflecting on her CULP experience, Feacher says the experience taught her to appreciate what we have here. She says their cadets were usually in class every day of the week with only a few hours off on Sunday.

“Here on campus we are able to roam through classes, we are able to take time off, pretty much do what we need to do as leisurely as we want whereas they are on a strict schedule,” Feacher said. Feacher appreciates the flexibility available here and says her favorite thing about Tennessee Tech is the different clubs and opportunities she gets to be a part of on campus, such as being a tour guide, NAACP, Alpha Kappa Psi and ROTC, of course.

After graduating in May, Feacher will commission and go to Fort Leonard Wood, Missouri, to start her military police training.

Feacher says the most valuable thing she’s learned in ROTC is not to make excuses.

“There’s always someone looking up to you and you never want to portray that you can’t do something,” Feacher said. “You just always have to put your best foot forward and continue to push forward and make it possible for yourself.”